One of the promises that Reliance Jio made during its launch in 2016 was that it would not have the complicated plans that all the other service providers in India seem to thrive on. On stage, Reliance Industries Chairman Mukesh Ambani said we will have simple plans that anyone can understand, and six months later, here we are just around the corner from the commercial launch of Jio to use the services from April 1, and the promise of simplified Reliance Jio plans has disappeared in the wind.

Not only did Jio have a large number of plans to choose from, they came with a small book’s worth of fine print. You got free, unlimited Internet only three hours of the night, and your plan’s data allowance included quota for Wi-Fi hotspots that you likely won’t find nearby. The free Internet usage during the Welcome offer came with fine print that you are limited to 4GB per day, which was reduced to 1GB during the Jio Happy New Year offer.

But if you thought that was bad, wait till you see the Jio Prime plans that were outed recently. The Jio Prime subscription requires you to pay a Rs. 99 fee to sign up and then you get… a chance to sign up for more Jio plans that confuse matters further.

That’s right, most of the Reliance Jio plans now have a regular plan, and then a Jio Prime plan. So if this time in April you’re thinking of getting a Jio connection, make sure that you’re not looking at the Jio Prime plans, which give you a lot more data than the regular Jio plans that new users will have to settle for from April onwards. 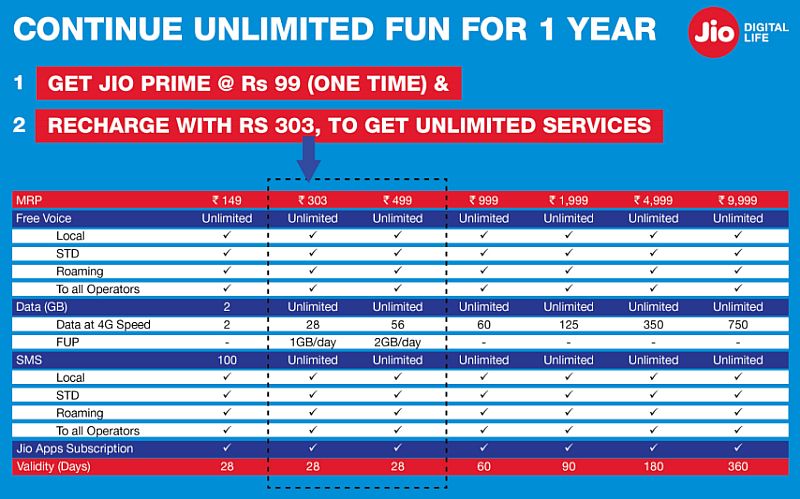 Essentially, Jio Prime is an attempt to lock in people and keep them from dropping out of the network once it’s no longer free. “Free hai toh achcha hai,” goes the accepted logic, and thus far we’ve been able to live with the sudden drops in connectivity, the utterly unreliable speeds, and the clunky apps and services because it has all been free.

The moment Jio becomes paid, even if it is extremely affordable, it starts to lose a lot of its appeal. Jio helped expose just how much the other telcos have been overcharging, but in general, we’ve had to switch to one of the legacy players anytime we’re inside a mall or an office for a meeting, once too often for Jio to become our primary cellular connection.

And today, everyone from Airtel, to Vodafone, to Idea, has succumbed to the Reliance Jio effect, and cut prices drastically as well. There are attractive (if equally complicated) plans from all the incumbents, and the big ones have proven to be more reliable than Reliance, with better customer service to boot.

There are a few reasons to still feel optimistic about Reliance Jio, in my opinion. Free calling without any special plans still sounds like a great value proposition, even if more and more of us use our phones for a lot more than making calls. Beyond that, even if a significant section of Reliance Jio’s users drop off after the actual commercial launch, it’ll still be starting from a much bigger base than competitors at the same point in their respective life-cycles. And if Jio loses some of the load right now, then it will most likely also be able to offer a better quality experience to the users who stay on board.

There are also the two “unlimited” Prime plans that Jio announced – the Rs. 303 plan, which gets you 1GB of high-speed data per day, and the Rs. 499 plan, which gets you 2GB of data. That’s not a bad price to pay per month, considering that calls are free. With JioCinema and JioTV, that 2GB of data can be used to consume a lot of content without paying anything extra too. Yes, 2GB a day isn’t an incredible amount of data, but it will be quite sufficient for most users right now.

These plans are a solid offering, and putting up the “Prime” subscription is just a way of trying to force people to get a Jio connection right now, to boost its numbers for April and the start of the new financial year. Then again, going by how things have been so far, we wouldn’t be surprised if Mukesh Ambani takes the stage to announce a Happy New Prime Subscriber offer next month.